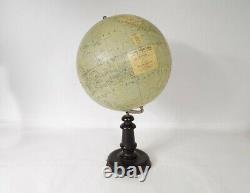 Add this shop to my favorites. Globe earth, world map erected by ch perigo professor of history and geography at st louis high school designed by alp mouraux , 19th century era. Wear of use, see photos. Born on January 22, 1828 in Rouen and died on June 17, 1885 in Paris, is a French geographer and historian.

Received, in 1850, at the upper normal school, in 1857 to the regulation of letters, perigo first taught history and geography to alençon and douai. In 1864 he was called to St. Louis High School, and later to the graduate school of business.

He is the author of precise geography and classical datlas who have rendered great services to the studies of his time. It is best known for its general atlas of ancient physical and political geography, from the Middle Ages and modern, betting, f. Diameter: about 35 cm height: about 58 cm.

The item \"globe world map ch perigo alp mouraux 19th century\" has been on sale since Tuesday, November 10, 2020. It is in the category \"art, antiques and objects of the 19th and before\".

The seller is \"antique-delaval\" and is located at/in valves. This item can be delivered anywhere in the world.