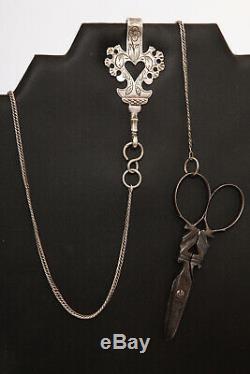 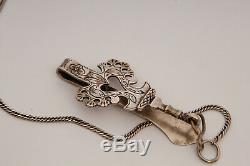 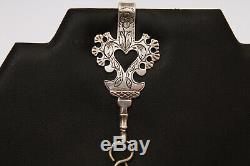 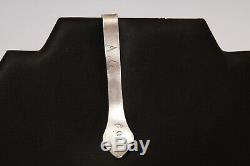 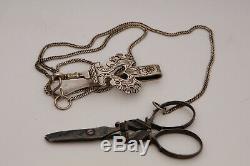 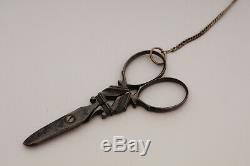 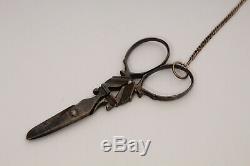 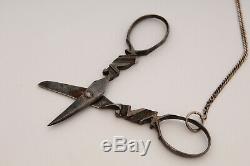 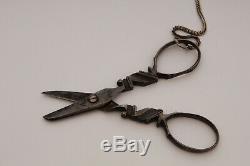 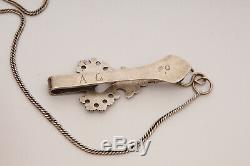 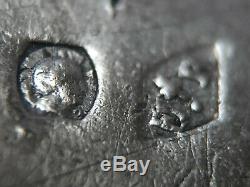 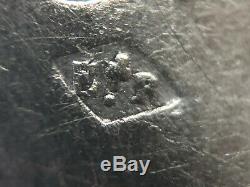 Punch neck brace, silver, second title, department, different from Niort. Hallmark of master goldsmith: initial e r with a shamrock in the middle. For Etienne renoux: we have little information about Etienne renoux, jeweler based in Niort. Between the first and second quarter of the nineteenth century.

He signed many traditional silverware. His punch: first initials around a clover in a horizontal diamond. Place of creation - execution: niort (deux-sèvres, city) Delivery Date: between 1840 and 1870. A copy of this hook is to Bernard d'Agesci museum in Niort.

Note friction and micro-scratches from use. The string and scissors are not silver. Scissors need to be tightened, geometric decor sober. Traces of rust inside the blades.

We have other chatelaines models in our shop. Traditional French jewelry keyboards, chatelaines hooks and hook lady scissors scissors hooks are called keyboards (lou Clavié) in Provence, chatelaines in Alsace and hooks and Poitou-Charentes and the Loire country. Some authors have thought to find rhinestone trimmed hooks in Normandy but it is in fact, at least originally before processing, busquières (see section Normandy). The hooks are formed dune metal blade more or less often decorated and engraved and pierced, bent back upon itself with a spatula-shaped portion intended to be hooked to lintérieure of the skirt.

Niort was a manufacturing center hooks very important in the 19th century and there are niortais hooks throughout the southern half of France, whose majority were manufactured between 1815 and 1880. All my packages are very carefully packaged and secured. Monitoring is carried out in France and abroad. You are satisfied with your purchase?