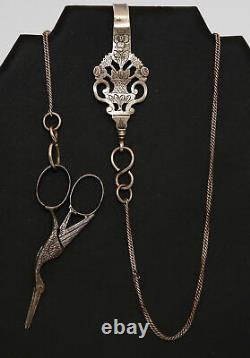 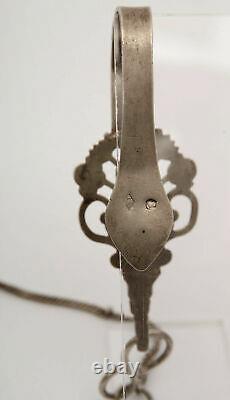 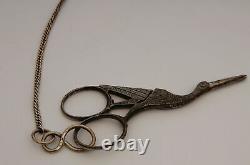 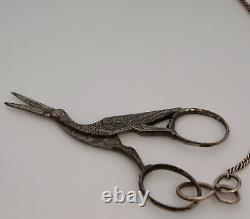 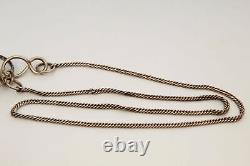 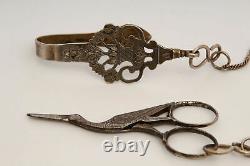 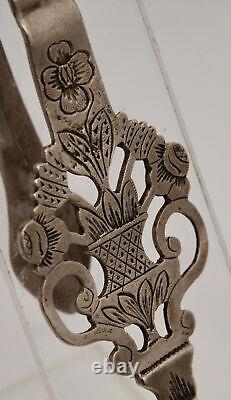 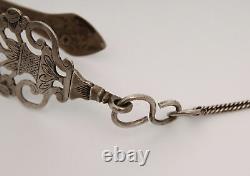 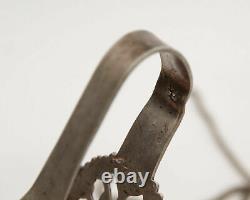 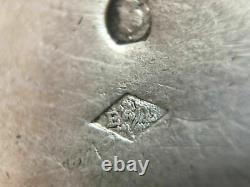 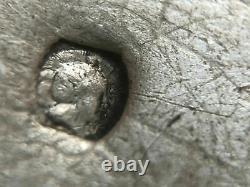 Crochet chatelaine scissors silver minerve orfevre edmond loze 19th z263. Crochet scissors traditional silver poitevin jewel. Large, model with vase or basket of flowers, engraved. A chain with scissors in the shape of a stork. Minerve punch and master punch goldsmith edmond loze. Edmond loze is one of the most famous niort jewellers. It was cited in 1849, 1876 and 1877 in the records of master goldsmiths. His son, paul, resumed his activity from 1876 to 1906.

Its punch consists of its initials on both sides of a flower, in a horizontal diamond. The hook weighs 24 grams. The chain and scissors are made of metal/iron. Note that a ring on the chain doesn't get straight.

Note that the hook has been twisted and straightened. Weaving and rubbing as well as use micro-stripes. Traces of rust on the scissor blades. Sold as in the photos. We have other models of chestnuts in our shop.

The traditional French jewels keyboards, chestnuts and hooks the hook of chestnut with scissors the hooks with scissors are called keyboards (lou clavié) in provence, chestnuts in alsace and hooks and poitou-charentes and country of the loire. Some authors believed that they found hooks with rhinestones in Normandy, but they were, at least at the origin before transformation, busquiers (see section Normandy). The hooks are made of a metal blade more or less decorated and often engraved and pierced, curved on itself with a spatula-shaped part designed to hang on the inside of the skirt. A pair of scissors are usually suspended at the end of two chains and, according to lionel bemère, a punch used to kill poultry was suspended in poitou. There are differences in the shape of square brackets across regions.

In the south, there is a special shape with a ring at the top in the shape of a bumper that opens with a silver screw. This ring was used to hang keys, leaving the chains free for a pair of scissors. In the south there are also hooks whose simple chains are split by a separator with a drawing matching that of the hook.

Niort was a very important hook manufacturing center in the 19th century and Niortian hooks are found throughout the southern half of the france, most of which were made in niort between 1815 and 1880. Font parts of the description do not hesitate. Not to point to zoom and click to enlarge. We try, through the photos, to show you as much detail as possible and to be as realistic as possible so that you are satisfied with your purchase.

The characteristics of the object and the state are described with maximum precision and objectivity. Thank you for detailing the photos for the state, but do not hesitate to point to zoom and click to enlarge. To confirm this description which, however, necessarily remains subjective. Our objects are ancient, they are not always perfect, they have lived, we must accept the small defects due to age.

You buy what you see. Sending with tracking number, the number is communicated to you as soon as you send it. Thank you for your visit. Check out my other objects!

Don't forget to add me to your favorites list! Thanks to our experience, we can guarantee shipping at our own risk of each object to the destination of your choice. The satisfaction of our customers remains our priority.

The return costs are at our expense. This item is in the category "art, antiques\ objects of xixe and before". The seller is "laboutiquedescuriosites" and is located in this country: fr. This item can be shipped to the following country: whole world.