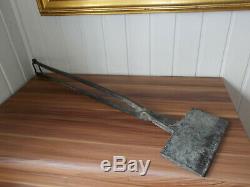 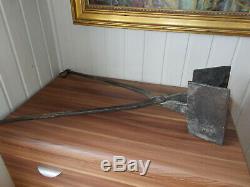 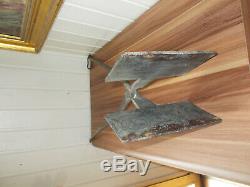 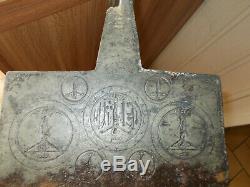 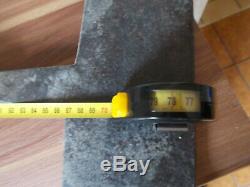 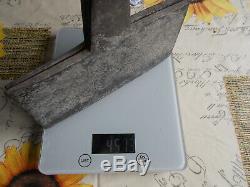 Iron mold wafers large claws cast iron cross seventeenth century 1697 4kg500. In 3 large and 4 small. Presence of rust on the plates. These are the kinds of large claws cast iron, very heavy, recalling the waffle irons (sometimes called molds wafers). The arms can reach 80 cm long, while the plates or pallets (rectangular usually) that are pressed against each other are approximately 10 x 20 cm.

One of the plates is engraved with religious scenes included in the circular layout of the wafers, the other is smooth. Pour onto a plate paste matzo (unleavened) is tightened the clamp and is placed in heat three minutes over hot coals. Once the cooked paste, it is cut with a roundel, following the contours of the circular wafers. Each cooking, one can in principle carry four wafers, two large and two small.

The plates all have drawings of religious scenes incised and \The most represented scenes are the crucifixion, flogging, the bearing of the cross, resurrection, christ in majesty, the paschal lamb. They are accompanied or replaced by monograms, Latin words of Greek or abbreviations as ihs (jesus), xps (Christ), inri (jesus, king of the Jews).

You can see the sun, moon, vegetation, as well as brand engravers. The hosts were well made, until about 1900, in rectories and sacristies of each parish by women belonging to these associations of laity who took care of the temporal churches, under the name of \Host comes from the Latin \This is the symbolic representation for Catholics of the body of Christ, offered to God as a victim, during the consecration during Mass. \This is why the irons hosts found mostly engravings of two large (the priest) and two small hosts (for the faithful). The item \The seller is \This article can be shipped worldwide.