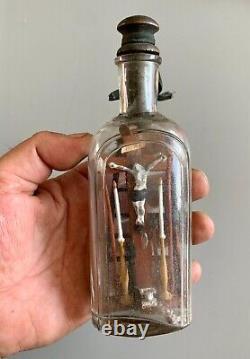 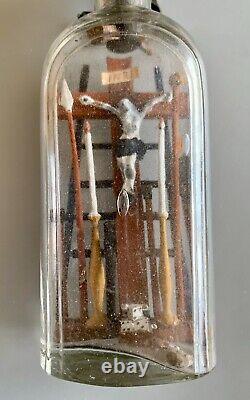 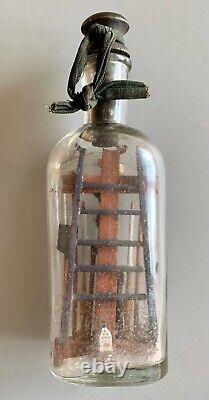 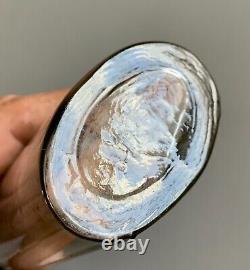 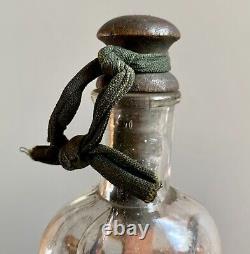 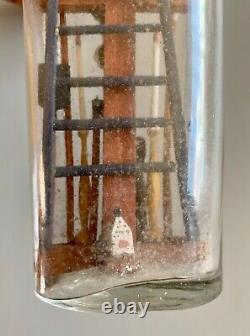 Bottle of passion work of patience found there in miniature the Christ cross with the main instruments of passion made of wood carved with knife and painted to note that all the elements are embossed (only one is debossed, only the cock walks in the bottle) the stopper mysteriously closed by a nail! Popular work late 19th traces of impurity in the beautiful flask in blown glass, it presents on the facade a kind of alcove.

Height: 18 cm, 6 cm wide, thickness: only 4 cm! There are miniature "Cross of Passion" enclosed in glass bottles, like bottled boats made by sailors: bottle of passion, or bottle-passion. Sometimes the instruments of passion are simply hung by wires inside the bottle, hung on bubble-shaped protuberances. The origin of this practice, dating back to the 18th century, is probably to be looked for with joy (aisne) where a miraculous fountain attracted many pilgrims. Everyone was leaving with a bottle filled with that water.

Some types of glass bulbs were then made, in which small figures in coloured spun glass were hung, representing two types of objects: on the one hand, the instruments of passion, and on the other hand, the characters and objects linked to the legend of joy. These vials were then filled with miraculous water.

The practice existed in Germany, in the mountains of the allgäu and the erzgebirge, where various scenes and crosses of passion were made, under the term geduldsflasche ("bottle of patience"). Later this fashion spread and these bottles were made everywhere, especially in Bretagne, where the art of bottling boats already existed and then in many countries as far as Quebec. (source wikipedia) bottle-passion here is an object of curious devotion that will raise at least one question: how to fit all these objects through the bottle neck when it seems logically impossible??? Come on, courage and patience, all you have to do is read this article and the veil will be lifted!

A bottle-passion is a transparent glass bottle, the glass of which can sometimes be slightly bluish or greenish and which contains a representation of the Christ on the cross called passion of Christ or calvary. "The year 1752 saw to come the realization of a religious hotel with his Christ on the cross, candles, vases, flowers and liturgical inscriptions. It is the first, to my knowledge, of a long series of bottles called "passion" which represent, in addition to the episodes of the life and death of Christ, (nativity, crucifixion, deposition of the cross.

The first French bottle - and Breton - represents a calvary: the Christ surrounded by the two larrons, equipped with all the attributes of passion. It bears the signature "f'rs bazin fecit, a st meloir, this 7 August, year 1763" (Bazin brothers, made to holy meloir. They are called a bottle-passion, a bottle of passion, a bottle of passion or a bottle-calvary, or calvary in a bottle and sometimes they are found under the partially inaccurate name of ex-voto.

A bottle-passion can only be considered ex-voto when it takes place in a church and only in this case. The objects displayed in the bottle are all related to Christ's passion. Thus you can see: the cross of the crucifixion, the nails that served to crucify jesus, the hammer, the tenailles, the sponge with the vinegar to drink at the end of the lance, the oillets, the flowers of lilies, the rod of the flogging and the reed, the sceptre derisory of jesus, the king of the Jews, the dice because the tunic of Christ was played with the dice, the lance of the centurion which pierced the side of Christ, the sword of stone, the lantern of the guards of the court, the sceptre and the whip attached to the flogging of jesus and the column to which he was attached for this torture, the crown the thorns, the tunic without seaming, the cock who sang three times during the denial of stone, the scale which is often located on the back of the cross for the dependation of the cross, the phylactère inri for "jesus de nazareth, king of the Jews on the ground", the sacred court pierced by the earth, the head of the dead, the left of a symbol of the Christ. You can also observe personal additions such as religious medals and also chromos or carved engravings representing angels or holy characters such as the virgin at the foot of the cross or holy jeans, ribbons, natural and dry or artificial flowers and leaves.

Personalization of such a bottle was possible but not ostensible. The number of objects in the bottle is variable: there can simply be the cross with the ladder but you can also count up to 46 pieces, all related to the passion of Christ. The objects included in the bottles are of wood, fabric, coloured paper or cardboard and/or gold, of dry vegetable materials, sometimes of iron, plaster for small figures and exceptionally enjoined with glass beads some bottles are polychrome when others have raw materials. The majority of containers are bottles, carafes, vials and jugs. You want to know how such a bottle is made?

Here are the tricks: the first operation is to create the medium that will receive the cross. This medium is itself in the shape of a cross that embraces the shape of the bottom of the bottle. This ensures the stability of the future building.

You know that all the parts are made out of the bottle but they are assembled and fixed in the bottle. The ladder is totally mounted outside the bottle, like the cross.

The wood that composes it is chosen for its flexibility: it is birch or juniper mainly, but also hazelnut. After diving the ladder into boiling water for a while, it can twist without breaking. By carefully holding the sizes, it was thus slipped by the neck to take place on the back of the cross. Very quickly, it resumes its original form.

Monsieur aubry, who restores old bottles, little believing in this process, does differently and here is his explanation: a ladder enters into the bottle either of a room being of the width of the neck, or, if wider, it is mounted inside each echelon bound on one of the arms, then the other arm joined on the free extremities of the echelons, all assembled by tenons and mortises. The most complex was to fix Christ on the cross. This explains why many bottles do not contain Christ. But patience and will make it possible to achieve everything! The installation of the parts in the bottle is done thanks to long needles, punches, thin wooden peaks, umbrella whales, in short everything that is long, fine and pointed and that enters the neck of a bottle.

Some assemblies are made to hold and mortise and this implies a great ability of the bottle factor. For many, the objects introduced are either nailed or glued. You may notice it on some photos below, sometimes the wooden stopper is held by a nail or a small wooden clave located on the horizontal and coming out on either side of the bottom of the neck. It allows to keep the bottle closed, thus preventing dust from entering it, while having play to allow moisture to come out of the bottle.

The stopper can inflate freely, thus preventing the neck from breaking. More rarely, it is decorated with a dome, crucifix, bell tower, head, ball or other religious attribute. Are bottles typical of a region? No, not specifically, these bottles exist everywhere in France and around the world. It is found in alsace, auvergne, lorraine but especially where there are patients!

"however, existed at the puy before 1939, a real specialist working for a speculative purpose. He sold his bottles 22 frs room to the Clermontian railwaymen in service on the line clermont-le puy; the latter in turn sold them to the Limagnais winemakers. From the book: artisans and peasants of France, 1946, directed by a. 236 some can be attributed to sailors because they have two additional lanterns, objects essential for night navigation and highlighted on ships. There are such bottles in Quebec.

They are very complete by the number of objects that appear there and are recognized by the raven that sits on the cross of the cross. An in-depth study of the decor allows them to be located, but a solid knowledge is needed. These bottles were made on long winter days and by people whose trade or occupation left them free time: sailors, soldiers or prisoners of war. They were realized for themselves, as ex-votos or to be offered to friends and family. Some bottles have the peculiarity of containing water.

This gives them a magnifying effect, making the objects included in the bottle very visible and very detailed. In auvergne, some are filled with alcohol: "this last wood, (the juniper) moreover possesses the property seems to give "good taste" and a beautiful color amber to the marc, because the bottles with " passions", it must be said are not only sought for a decorative purpose, but they are filled with alcohol, (.) » extract from the book: artisans and peasants of France, 1946, directed by a. This item is in the category "art, antiques\objects of xixe and before". The seller is "lecasteel" and is located in this country: fr. This item can be shipped to the following country: whole world.